This short fairytale is my bachelor film about young boy who has no friends. He lives in a house far away from city and goes to school by bike every day. One day his classmates, the bullies, break his bike. The boy wishes for a new bike for Christmas but instead of getting a bike, his other unexpected wish does come true. He gets a friend but much different than you could ever imagine… 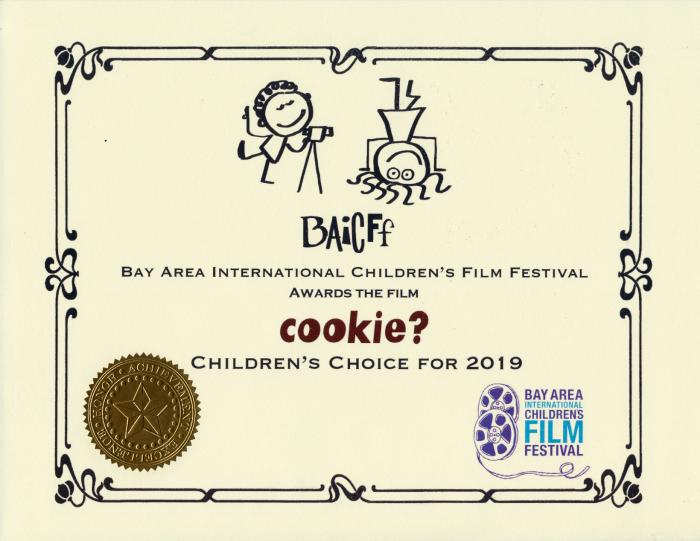 Cookie? was dubbed to Basque language by organizers of Zinetxiki Zinemaldia - Internacional Film Festival for Children and Youth as reading subtitles might be a struggle for many kids. It was also dubbed to Russian language by professional actors for the purposes of Karelian International Film For Youth Festival.

Thanks so much for making the journey.
I was happy to see that you won!
- Jim Capobianco

Congratulations! Kids Video Connection’s review panel thinks your film Cookie? is ideal for our film festival. We all greatly appreciated the film’s creativity and beautiful audio and visuals, and we are excited to screen it for our audiences. While we would love to have you present at the festival here in Atlanta, if this is not a possibility I hope we can at least arrange an interview through video conferencing for the audience on the day of the screening.

Congratulations, we have decided to award you one of the “Audience Awards” from this year’s festival. Your prize is a 3-month subscription to iPitch.tv, where you can pitch your project and have it seen by industry executives! I hope you are able to make the most of the opportunity.

This year the local television channel EITB is collaborating in our festival. They have proposed to us to make a special program to promote the Zinetxiki Zinemaldia festival by showing one of the selected films in the international competition. Your film “Cookie?” is one of the candidates to participate in this program.

In February of 2019 I was invited to visit BAICFF. It was a great festival with many beautiful films and nice people. For the first time I was present in cinema while Cookie? had been screened to kids and was very happy to hear them laugh. I was even happier to find out they voted for it.
During the festival I had the opportunity to meet Jim Capobianco who is BAICFF Co-Producer & Curator and nominee of Academy Awards for Original Screenplay on Ratatouille. Jim also worked on movies such as Mary Poppins Returns, Coco, Finding Dory, Inside Out, Finding Nemo, Monsters, Inc., A Bug’s Life, The Lion King… Besides he is unbelievably kind guy.

Jim was willing to give us a tour in Pixar and answer a lot of our questions. Halls in main Pixar building are something like an exhibition in a gallery – they are decorated by many sculptures, concept-arts and paintings created during production of their movies. Visiting Pixar and also San Francisco in general was an amazing experience.

Thanks goes to Litfond and avfx for supporting this journey.